The last master of modernism

Only 10 days before his incredible 105th birthday, Oscar Niemeyer – the last of the great representatives of architectural modernism – died on 5th December in Rio de Janeiro.

Niemeyer, who has been professionally active since completing his studies in 1934, was undoubtedly one of the world's most influential architects ever. Hardly anybody was able to put so much of a bold lightness into poured concrete as he was. The more than 600 realized buildings and urban projects include, for example, the UN headquarters in New York from 1947 (in collaboration with Le Corbusier), the Edificio Copan high-rise residential building in Sao Paulo from 1951, university buildings in Brazil, Israel, Algeria and Cuba, theNiteroi Contemporary Art Museum (2001), the Rivello auditorium on the Italian Amalfi coast (2010), or the cultural center in Aviles, Spain, realized in 2011.

His big moment came in 1956, when the Brazilian President Juscelino Kubitschek announced that the long-dreamed dream of a new capital - Brasilia, located in the geographic center of the country, would become a reality. Among the 5,500 architects from around the world who had participated in the urban competition, Lucio Costa won with his concept in the ground plan form of a soaring bird - the shape which is now a part of every urban textbook. While Costa was responsible for the Masterplan, his closest friend Niemeyer designed several major buildings for the new city. The construction work started in early 1957. In the middle of a steppe, roads were created from nothing, rails were laid, about 30,000 construction workers were working on the city construction throughout the day and night. Even an artificial lake was created around the presidential residence, which is considered one of the most beautiful of Niemeyer's buildings, thanks to its elegant parabolic pillars. On 21st April 1960, only four years after the start of construction, the new capital was inaugurated. Despite the fact that the inhabitants of Brazil did not know how to get accustomed to their new capital for a long time, Brasilia has been regarded as a masterpiece of modernism from the early days of its existence.

In 1987, the city with more than 4 million inhabitants, which had already outgrown its originally planned size a long time ago, was added to the UNESCO World Cultural Heritage List. Later, however, Niemeyer himself had to state self-critically that the “Brasilia experiment” was not successful. Contrary to his dreams, the general population was soon unable to afford the apartments in Superquadras, with the carefully planned nurseries, schools and shops. After the military coup in 1964, most of the buildings were privatized and the city, which had originally been designed as socially balanced, turned into a lifeless monument within a short time.

Oscar Niemeyer, as a member of the Communist Party, had to emigrate from Brazil in 1966 and he was living in exile in Paris for 20 years. There, among other things, he planned the French Communist Party headquarters, designed furniture and devoted himself to public buildings in North Africa and the Middle East. Niemeyer, awarded the PritzkerArchitecture Prize in 1988, remained faithful to swift and bold lines until his very last project. “I don't like the right angle,” he used to say, “I am attracted by the free and sensual curves that I find on the water, in the clouds in the sky or on the body of a beloved woman.” His famous quote: “Architecture consists of a dream, a fantasy, curves and empty spaces” could, however, be applied in other areas besides buildings. For example, just recently he designed a new product line for a sport shoes manufacturer – the Converse brand.

With Oscar Niemeyer, the chapter of history called “The Architecture of Modernism” is closing. Although he, like modernism itself, was perhaps too focused on the idea and form and less on the human scale for many people, he leaves behind an amazing legacy of concrete sculptures from a period of eight decades and an unshakable faith in the beauty of a created, built world. 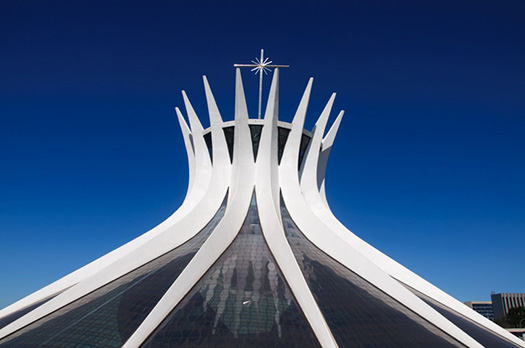